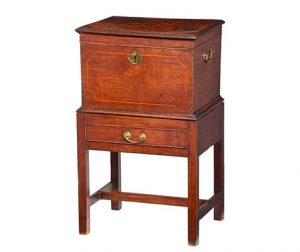 Henry Merwin Shrady is a popular American sculptor associated with the creation of the Ulysses S. Grant Memorial in Washington, D.C. The sculpture of an elk buffalo by Shrady is offered in the upcoming Session III of the Premier Auction presented by Brunk Auctions. Titled Monarch of the Plains, the statue is among the first American bronzes that were cast by the lost wax method.

An oil on canvas piece titled The Visitors by 20th-century realist painter John Koch is a featured artwork. The light-filled allusions described scenes set in Koch’s Manhattan apartment. The auction also offers period furniture like the Chippendale corner cupboard and a Serpentine chest. Collectors can also bid on Chinese antiques like scrolls, porcelain, carved articles, and firearms. Explore the full listings and register to bid online on Bidsquare.