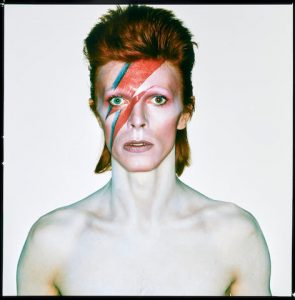 Bonhams will offer photographs by famed photographers Brian Duffy, Roy Schatt, Ansel Adams, and others in an upcoming auction. Brian Duffy became a highly respected and well-known photographer in the UK during the 1960s. He was best known for documenting the high-fashion and celebrity chic culture of London’s “Swinging 60s” scene. Duffy’s fame further rose in the 1970s when he produced three album covers for David Bowie, including the cover for Aladdin Sane. Headlining the Bonhams auction is a Brian Duffy photograph of David Bowie taken during the sitting that produced the quintessential Aladdin Sane album cover. The available photograph depicts a shirtless Bowie with the iconic lightning bolt stretching from his forehead to his jaw and with his eyes open. In contrast, the 1973 album cover shows Bowie in the same manner but with closed eyes.

Also presented by Bonhams is a black and white photograph taken by Roy Schatt. The photo, taken around 1954, shows James Dean leisurely walking through Times Square. Schatt captures the famous actor as he smokes a cigarette. Dean appears to be mid-step with both hands in his pants pockets. The photographer’s penciled signature can be found in the margin while the copyright credit reproduction limitation stamp is located on the photo’s back side. View the entire collection of photographs and register to bid by visiting Bonhams.