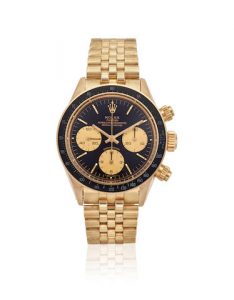 Charles Fasoldt is considered one of the most influential watchmakers of the 19th century. He pioneered a double-wheel lever escapement, which was a major contribution to the American watch movement. Charles Fasoldt’s chronometer desk timepiece will cross the auction block with Bonhams during its upcoming Fine Watches and Clocks sale. Produced in 1870, the lot features a gilt bridge pattern and a micrometer regulator.

Another notable lot is Rolex’s reference 6263 bracelet watch. Debuted in the late 1960s, Rolex reference 6263 watches were specifically designed for race car drivers. Offered in both gold and stainless steel, the model was popular between 1971 and 1987. One of the distinct features of this reference is its black plastic tachymeter. Another lot of interest is Albert H. Potter & Co.’s timepiece from the 1870s. The watch is a strong example of watchmaker Albert H. Potter’s patented chronometer design. Also showcased are timepieces from Jaeger-LeCoultre, Adolf Nicole, Tiffany & Co., and Viner & Co. Interested collectors can explore the catalog and register to bid online on Bonhams’ website.