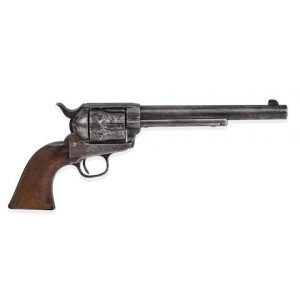 A famous gunfight at the O.K. Corral started on October 26th, 1881. Virgil Earp, brother to Morgan and Wyatt Earp, led the fight with Doc Holliday. After the gunfight, a group of outlaws retaliated and maimed Virgil’s right arm. That didn’t keep him out of the crime-fighting business, as Earp went on to start a private detective agency. A handwritten letter by Virgil Earp on agency letterhead is currently up for bid in The Early West auction from the collection of Jim and Theresa Earle, offered by Bonhams.

There are over 260 available lots in the sale, including a selection of noteworthy firearms. One available gun is Pat Garrett’s Colt single-action revolver that he used to kill Billy the Kid. Though they had once been friends, Pat Garret eventually tracked Billy the Kid and shot him in the chest on July 14th, 1881. This famed gun will appear at public auction for the first time in this event. Other notable firearms include Wild Bill Hickok’s Springfield Trapdoor rifle that was buried by his side in Deadwood; Bat Masterson’s Colt single-action revolver that he custom ordered from the Opera House Saloon in Dodge City; and a Smith & Wesson Schofield revolver possibly used by Jesse James. View any of these lots and register to bid on Bonhams.