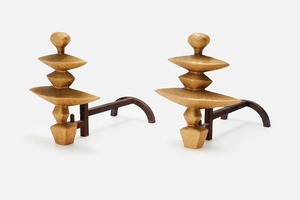 The grandson of Standard Oil Company magnate John D. Rockefeller, Sr., Nelson Rockefeller made his name in politics. He served as the 41st Vice President of the United States under Gerald Ford, as well as a four-term governor of New York. Rockefeller was also an avid collector of Modern art and works from cultures in Africa, Oceania, and the Americas. The upcoming Billings auction features a pair of andirons from the Nelson Rockefeller Collection. Cast in gilt bronze and iron, these andirons are Rockefeller-commissioned reproductions of original Alberto Giacometti works.

The upcoming auction presents over 400 lots of Modernist and 20th-century design. Some of the most famous designers of the period are represented in the catalog. Among them is Pierre Jeanneret, cousin to Le Corbusier and a respected designer in his own right. Several sets of Jeanneret armchairs are on offer. They were produced in teak, cane, and fabric for Punjab University in Chandigarh, India. Bidders can also consider a set of eight 1960s-era ‘DCM’ chairs from Charles and Ray Eames, a Vladimir Kagan ‘Omnibus’ sofa in mustard yellow Holly Hunt mohair fabric, and a selection of fine art items. Visit Billings’ website for the complete catalog and to place a bid.