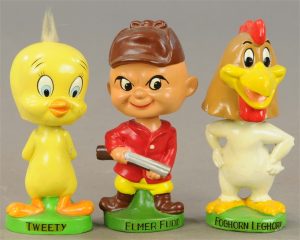 At the top of the upcoming Basics Sale catalog, offered by Bertoia Auctions, is an automaton from Frank Nelson. The artist spent his early days designing motor and aircraft models. In the early 1970s, he started to create automata in his figurative style using carved and painted wood. Introducing “The Tamer” in 1975, Nelson described it as “the best idea I have ever had.” As the automaton plays, the Tamer strikes the tiger with a whip, but the animal refuses to perform. On the third strike, the role of the human and the beast is reversed as the tiger puts its head inside the Tamer’s mouth.

Besides automata, a set of deluxe motors from Tootsietoys will also be featured. Originally based in Chicago, Illinois, Tootsietoy is a manufacturer of die-cast toy cars and other vehicles. Their toys were popular between the 1930s and the 1990s. A Vielmetter clown-artist toy is available as well. The toy figure is dressed as a clown and appears to be painting on a canvas. Those interested in this or any other piece can register to bid by visiting Bertoia Auctions.