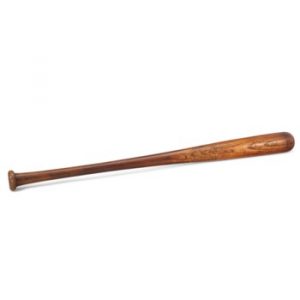 In Babe Ruth’s Own Book of Baseball (1928), Ruth writes, “Last season… I started ‘notching’ my bats for home runs like the old gunmen used to notch their guns when they killed a man. Every time I would hit a home run I would cut a notch in the bat handle of the club I had used.” There are only five known notched bats that were game-used by Babe Ruth. One of these bats leads the upcoming Christie’s auction of important baseball memorabilia. The catalog offers several other game-used bats associated with Ty Cobb and Jimmie Fox.

A variety of lots related to disgraced superstar Pete Rose, who was famously banned from baseball for gambling, will also come up for bid. Notable Rose items include the legal document by the Office of the Commissioners of Baseball banning him from the game and a Pete Rose professional model bat with a “corked barrel.” The sale will present several items related to the marriage of Joe DiMaggio to Marilyn Monroe, including a copy of the inaugural issue of Playboy in which Monroe appeared. The offered copy of the magazine bears DiMaggio’s signature on the cover. View any of these lots and register to bid on Christie’s website.