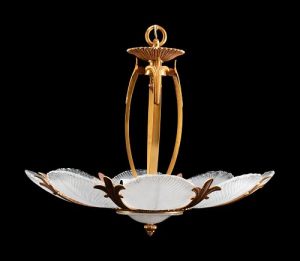 Furniture of all sizes, colors, and eras will be available in the upcoming two-day Hindman auction of Atlanta collections. This sale features over 500 lots of European furniture and decorative art from every period between the Renaissance and Art Deco. The first session features a Louis XIV bureau Mazarin. This desk was named after French prime minister Jules Cardinal Mazarin (1642 – 1661). It is decorated with Boulle inlay depicting exotic and grotesque mythical figures. The base is supported by eight legs in X-shaped cross stretchers. The design is attributed to André-Charles Boulle, a noted French cabinetmaker.

A three-piece parcel-gilt bronze and marble clock is also available on the first day of the auction. The middle piece shows a woman conversing with a child, who is holding a book. The side pieces feature cherub-like figures holding flowers. ‘J. B. Marchand’ is inscribed on the dial. Jean-Baptiste Marchand was a general in the French army in the 19th century, best known for his explorations of Africa. To view the full catalog and register to bid, visit Bidsquare.