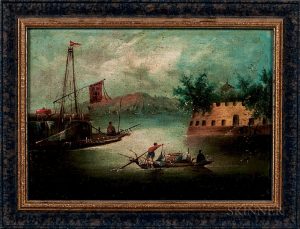 Asian art is a broad category, one that crosses multiple regions, numerous nations, and more than a few decorative labels. Sampling from these cultures is no easy task, but is well-handled by Skinner in the upcoming Asian Works of Art auction. Over 550 lots are set to cross the auction block, ranging in estimates from $200 to $100,000. This broad price range allows for an even wider selection of available items.

A pair of Huanghuali yoke-back armchairs rise to the top of this auction’s catalog for good reason. These chairs were made in China in the 17th century, elegant with fluid lines and intricate floral carvings set in relief. Another standout lot is a pair of bright green vessels, carved with traditional shapes in celadon stone. These beautiful cylinders give a strong introduction to this auction’s large selection of carvings and jade work.

Beyond the ancient pieces dating to the later Chinese dynasties, some modern works from Japan and Malaysia are also included. A woven panel from the early 20th century depicts five playful boys surrounding a large vase—a vase that has evidently been broken. The creativity of this woven scene is mirrored in a watercolor love scene painted by Tay Chee Toh, which blows a breath of abstraction into the traditional Eastern forms. Explore these lots and many more on Bidsquare.