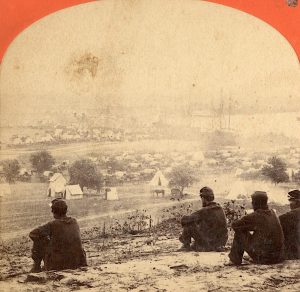 Stereoviews were antique photos that also served as an early iteration of 3D media. Popular in America between the 1860s and 1920s, stereoviews used two almost identical photos, taken a few inches from each other. When viewed through a lens, the photos would create the illusion of three dimensions. This October, Artelisted will bring 150 examples of these photos to auction in its Stereoviews Americana sale.

One of the main appeals of stereoviews in the late 19th and early 20th centuries was allowing Americans to feel like they were present for major events. A featured lot in this auction, for example, is a stereoview of President Woodrow Wilson addressing Congress. For contemporary viewers, these antique photos also serve as historical documents, including stereoviews taken during the American Civil War. Several highlighted lots show the wounded and dead after Civil War battles. Others, meanwhile, remind viewers of the less documented, quieter moments between skirmishes.

Photos of the railroad were popular for stereoviews because Americans were fascinated with this new, fast mode of transportation. Available in this auction is a photo of soldiers sent off for the Spanish American War on a train, their loved ones gathered near each window.

As time went on, it became possible for many people to create stereoviews. This allowed for more local, slice-of-life moments to be captured. One antique photo coming to auction shows three workers shipping pineapples in Florida. Each man has his place in the assembly line to wrap, store, and then box up the fruit. Another photo depicts a man kissing a woman on the cheek. Little does he know that another man, who perhaps also has feelings for the woman, is about to hit him on the behind. View each of the lots and register to bid on the Artelisted website.