Art of the American West 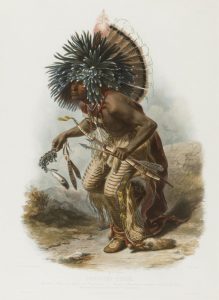 Among the more valuable works is one by Karl Bodmer that depicts a “Moennitarri Warrior in the Costume of the Dog Danse.” Bodmer was a Swiss-French printmaker, etcher, lithographer, zinc engraver, draughtsman, painter, illustrator and hunter. He is best known in the United States as a painter who captured the American West of the 19th century. You will also find many fine works of pottery, including a “monumental Apache olla,” from the late 19th or early 20th century. An olla is a ceramic jar, often unglazed, used for cooking stews or soups, for the storage of water or dry foods, or for other purposes. This particular olla is urn-shaped with five columns of stacked diamonds, a figural motif with floating geometric elements throughout.

Another highly desirable piece is the John Nieto “Fancy Dancer” acrylic painting, which is signed and dated twice and titled on the stretcher. Nieto was well-known as one of America’s most dynamic contemporary artists, concentrating on Western themes that transcend mere representation. As can be seen, he utilized intense primary colors, applied in bold strokes to give dimension and character to the canvas. View any of these lots and register to bid at Invaluable