Art by Muhammad Ali, Sports Memorabilia, and More at Bonhams 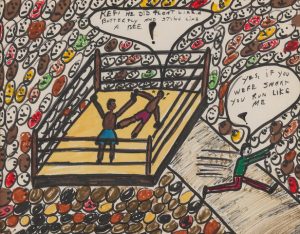 The upcoming TCM Presents… It’s a Knockout auction, offered by Bonhams, centers around items from the Rodney Hilton Brown Collection of Muhammad Ali art. Though Ali was surrounded by art his entire life (his father was a muralist), Brown was instrumental in encouraging Ali to create his own art as an adult and sell it in Brown’s gallery. One of the featured lots from the collection was created during the filming of Freedom Road in Natchez, Mississippi in 1978. The painting depicts Ali standing over a defeated opponent in a boxing ring. The opponent says, “Ref, he did float like a butterfly and sting like a bee!” The fleeing referee calls back in response, “Yes, if you were smart, you run like me.”

Beyond Muhammad Ali art, there are items from the Jim and Theresa Earle Collection of Boxing and Sports Memorabilia. Notable lots include fight-worn boxing gloves, as well as photographs of famous boxers such as Robert Fitzimmons, Kid McCoy, and Jack Dempsey. There are also items from this collection unrelated to boxing, such as a cashed checks by Ty Cobb and Vince Lombardi, a photograph signed by Jesse Owens, and a baseball cleat worn by Babe Ruth. View any of these lots and register to bid on Bonhams.