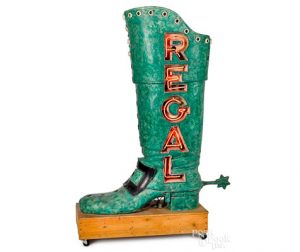 In the 1920s, families walking down the Coney Island Boardwalk would see a machine-operated display of three monkeys playing (and cheating at) poker. This display, along with 455 other pieces of Americana memorabilia, is available in the upcoming Antique Toys & Other Amusements auction, presented by Pook & Pook. Each monkey wears a fur coat where it hides its extra cards. According to the Coney Island History Project, the vintage monkeys remained on display until the mid-80s.

Also coming to this auction by way of Coney Island is an automaton of a magician and his assistant. Boardwalk visitors would find this piece inside the World of Wax. With a grin, the magician waves his wand as the nude woman levitates. The lot comes with a letter from the piece’s former owner, Mr. Henry Fox. He describing the decline of Coney Island in the 1960s through the 80s and the work he, along with a few others, did to preserve what remained.

Another highlighted lot is the Bulls and Bears Wall Street board game from 1883. In this luck-centered game, players bet on stocks whose value fluctuates through chance. Caricatures of successful businessmen of the era line the game board, including Cornelius Vanderbilt and Jay Gould.

Those interested in Mid-Century Americana can also consider several furniture pieces in this auction, including a child’s barber chair. View each lot and register to bid on  Bidsquare.