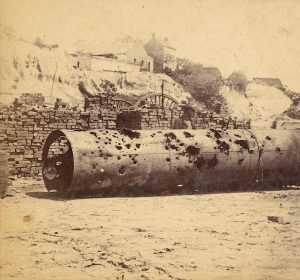 Stereoviews were considered among the first forms of 3D photography. Popular between 1860 and 1920, two nearly identical photos were taken with a stereoscopic camera and then developed, printed, and mounted next to each other. They were then looked at through a stereoscope, where the image could be seen in three dimensions. In the upcoming Antique American Stereoviews auction, presented by Artelisted, are photos from the American Civil War, World War I, the Spanish-American War, and more. Included is a Civil War stereoview of Fort Sumter on April 14, 1865, showing a crowd awaiting the arrival of General Anderson and his guests just before the raising of the American flag. This photo was taken on the same day that President Abraham Lincoln was assassinated in Washington, D.C.

Another stereoview in the auction a rare photo from the Spanish-American War showing a soldier sounding a bugle. Other available items include photos of a Masonic hall in Palatka, Florida, a Civil War Confederate redoubt, and a Native American ceremony. View the entire catalog and register to bid by visiting Artelisted.