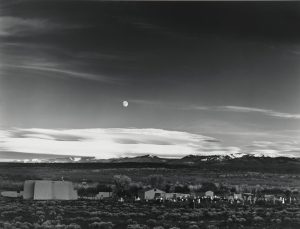 Clearing Winter Storm, Yosemite National Park is among the highlights from this collection of Ansel Adams prints, presented by Sotheby’s. The photo was taken from Adams’ favorite vantage point in Yosemite National Park. It captures the changing skies of a storm as first rain and then snow passes. “Sometimes I do get to places just when God’s ready to have somebody click the shutter,” said Adams about such photographs.

Another photograph that found Adams in the right place at the right time is Moonrise, Hernandez, New Mexico. Driving home after a fruitless day of shooting, Adams realized he had a perfect shot as the moon rose over the settlement of Hernandez. The moon, clouds, mountaintops, and crosses from the settlement’s cemetery share a brightness in the picture, connecting the human and natural worlds. This is the earliest print of the photograph ever to appear at auction. Those who would like to learn more about Moonrise, Hernandez, New Mexico can read Auction Daily’s extended coverage.

A photograph by Adams of artist Georgia O’Keeffe and park guide Orville Cox round out the featured lots. Adams got to know O’Keeffe in Taos, New Mexico, in the late 1920s. In the photograph, Adams captures an expressive grin from O’Keeffe. Register to bid and view each of the lots on the Sotheby’s website.