Ansel Adams and the American West: Photographs from the Center for Creative Photography 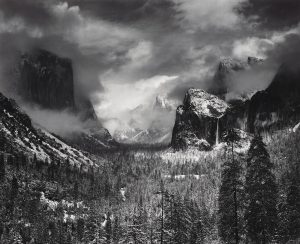 Born in 1902, Ansel Adams would go on to become one of the most influential artists in American photography. Adams’ works were known for exploring the wilderness of nature, especially national parks and other protected areas in the American West. However, his photography encompasses a wide array of subjects, including personal portraits, still lifes, architecture, and landscapes. This December, Christie’s will present a retrospective of Ansel Adams, tracing his career from his early works to his later creations.

Highlighted in the auction is Adams’ Clearing Winter Storm. This piece is a black and white photograph of Inspiration Point, a scenic spot in the Yosemite Valley. Christie’s describes the image as “a moment of beauty.” A similar photograph is entitled Mount Williamson, which Adams photographed in 1944. The picture takes a view of the landscape surrounding Manzanar, California. Other available lots include a shared portrait of Georgia O’Keeffe and Orville Cox, a photo of a gushing spring, and another of a New Mexico granary. Register to bid online on Christie’s.