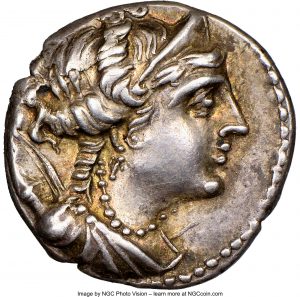 The Maximinus II is an ancient coin named after Galerius Valerius Maximinus, who rose to become a junior Eastern emperor after a split in Roman politics. The coin depicts Maximinus as Caesar. Such pieces were issued from 310-313 A.D. Along with many other ancient coins, this piece is available in the fourth part of the upcoming Ancient Coins Selections from the Morris Collection sale, offered by Heritage Auctions.

Also available is a Gaius (Caligula) coin. Gaius Caesar, commonly known as Caligula or “Little Boot,” succeeded Tiberius as a Roman emperor in 37 A.D. He ruled for four years before he was assassinated by Roman senators in 41 A.D. at the Palatine Games. The item shows a portrait of the emperor on the front with a Roman inscription underneath. Historic coins such as a Judaea Bar Kokhba Revolt and a Domitian piece are also presented in the auction. Find the complete catalog and register to bid online on Heritage Auctions.