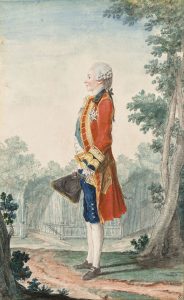 Guercino’s The Adoration of the Magi was once believed to be lost. Now, it is a featured piece in the upcoming drawings auction, presented by Christie’s in late March. The drawing depicts the biblical Nativity scene as the Magi approach the Holy Family. In a 19th-century catalog, the drawing was misattributed to another artist, leading to years of confusion.

The auction also features several drawings by Simon Vouet. Influenced by Caravaggio while working with him in Italy, Vouet was particularly inspired by Caravaggio’s use of light. Vouet eventually returned to France to become the first painter of Louis XIII. Bidders will find two portraits by Vouet in this sale, one depicting Cardinal Jules Mazarin and the other of an unidentified 75-year-old man. The lot essay from Christie’s notes that Vouet depicted the religious figure less formally than similar works. Many of Cardinal Mazarin’s other portraits show him clutching a book and wearing his full cardinal attire. In contrast, the Vouet piece shows Mazarin wearing a simple cassock and grabbing its cord. Although the identity of the elderly man in the other Vouet piece is unknown, there are some indications that he was part of the king’s court. Vouet often painted subjects of differing ranks, from lords to poets to perfumers.

A piece by Giovanni Battista Tiepolo rounds out the highlighted lots. In the 18th century, Tiepolo gained partons from around the world who admired his Rococo style. Included in this event is a drawing of the Holy Family, one of 70 depictions Tiepolo created on the same subject. Christie’s notes that this drawing was most likely a creative exercise for Tiepolo instead of a commissioned piece. Register to bid for this event on the Christie’s website.