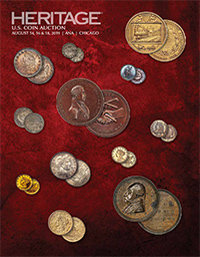 The world is moving ahead to become a digital globe today; taking leaps that humans could only imagine, a while back. Like the advancement of digital currencies. As the prowess of such currencies grow, physical notes become more significant for collectors and the world itself. This August, presenting those invaluable notes is ANA World’s Fair of Money Currency Signature Auction from Heritage Auction.

The curation of 123 lots, with significant categories such as federal reserve notes, gold and silver certificates, is meant to stun buyers with plenty of surprises. Amongst the hits is 1928 Federal Reserve Note of $5000. The note powers through in the list as it sits with the highest estimated value of $200,000. Similarly, one of the most important highlights is the $1000, 1934 Light Green Seal Federal Reserve note from the San Francisco District. The note flaunts its only reported serial number 1 as it tempts significant collectors.

Go through more of such historical notes like a T3 of $100 from 1861 and a $10 Mule North Africa Silver Certificate from 1934, in the auction. To register, bid and for more information visit Heritage Auctions.