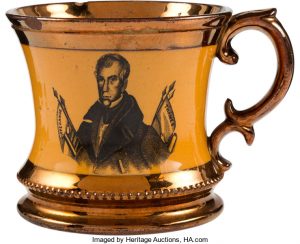 During the annual meeting of the Congress of Industrial Organizations (CIO) in 1946, Franklin Delano Roosevelt, Jr. accepted an award on behalf of his father. The former president was honored by the CIO for “the tireless service he gave to the toilers of this nation and the world.” Heritage Auctions’ upcoming Americana & Political Signature Auction features this CIO gold medal. It depicts a factory worker at the center and reads, “In lasting gratitude to Franklin Delano Roosevelt 1946.”

This sale also includes a scrapbook by Catherine Elizabeth Schultz Miller. It contains newspaper clippings of the Civil War and family obituaries from the 18th through the 20th centuries. This scrapbook carries a family legacy that has been passed down through the Schultz family for almost 200 years. An 1844 American flag used by an anti-immigrant nativist group is also available. Created to support Henry Clay’s presidential run, the flag is inscribed with the words “Native American.” View any other piece in the listings and register to bid on Heritage Auctions.