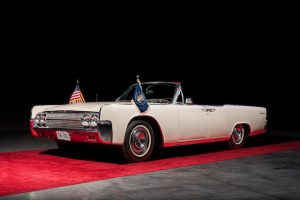 Following the September 11th, 2001 attacks, collector Jim Warlick became concerned that children would stop visiting Washington, D.C. to learn about American history. He decided to take his collection of American presidential memorabilia on the road to fill the need. 20 years later, part of his “American Presidential Experience” traveling exhibition will come to auction with Bonhams. Among the leading lots is a 1963 Lincoln Continental convertible that transported President John F. Kennedy from a hotel to the airport the morning of his assassination. The four-door white convertible has a restored engine and original red leather interior. Other JFK items in the auction include his Air Force One bomber jacket, the Lincoln Continental Mark V that he used as his personal vehicle, and the steel-nibbed pen that Kennedy used to create the Peace Corps.

Roy Lichtenstein’s signature screenprint titled The Oval Office leads the fine art selections. Signed and dated in 1992, this distinct view of the President’s working space was commissioned by the Artist for Freedom of Expression project. Several prints by Andy Warhol are available as well. Find continued coverage of this event on Auction Daily and register to bid on the Bonhams website.