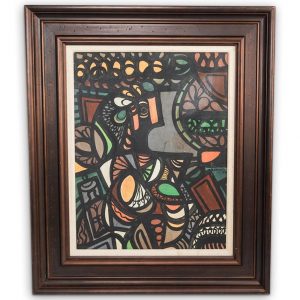 Amelia Peláez’s well-to-do parents gave her access to all the artistic opportunities Cuba could offer at the start of the 20th century. Still, Peláez felt something was missing. She traveled to France, where she eventually discovered Cubism and other emerging abstract art movements. Peláez became an important part of the Vanguardia movement that brought abstraction to Cuban art. Headlining an upcoming Akiba Antiques sale is Amelia Peláez’s Womans, produced after her return to Cuba. An oval and teardrop pattern loops around the canvas in a series of bright colors.

Those interested in works from the early 20th century can also consider a wide array of Steuben glass. These pieces come to auction from the collection of Alan and Susan Shovers. The couple built this collection over 18 years by fostering “relationships with dealers and collectors willing to part with a piece or two of their prized collections.” Highlights include a “Diving Lady” centerpiece bowl produced in 1926.

Collectors looking to dive even further back in history will find a Chinese tea caddy from the early 19th century. At that time, tea was an expensive commodity making its way from China to Europe. Beyond their decorative qualities, these caddies also ensured the owner’s tea was safe from prying hands. The example coming to auction with Akiba Antiques is made from mother of pearl. Decorating the caddy are birds sitting on tree branches and winged dogs. Register to bid and view each of the lots on LiveAuctioneers.