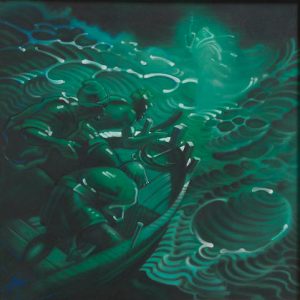 Bonhams presents Alligator!, an event with over 70 lots connected to Jerry Garcia, the Grateful Dead’s lead guitarist. Pieces range from Grateful Dead gold records to Hawaiian shirts Garcia once owned. The auction’s titular lot is a Fender Stratocaster that Jerry Garcia nicknamed “Alligator.” The guitar got its name from a sticker of an alligator in a bib, holding a fork and knife. Garcia used “Alligator” through the early 1970s, most notably during the Grateful Dead’s 1972 European tour.

Also among the highlighted lots is a gold record from the Recording Industry Association of America. Garcia and the Grateful Dead were awarded this record for the band’s self-titled debut album, which reached $1,000,000 in sales. This success came despite the band members’ disappointment with the album: “The whole process felt a bit rushed,” wrote bass guitarist Phil Lesh in his autobiography. A later award given to Jerry Garcia is also available in this auction, an Ampex Golden Reel Award. Garcia received this for the 1989 live album Dylan & the Dead, a collaboration between the Grateful Dead and Bob Dylan. View each of these lots and register to bid on Bonhams’ website.