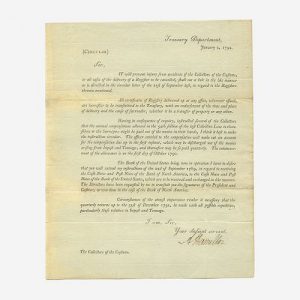 At the beginning of Congress’ second session in 1790, the United States federal government was essentially bankrupt. Its financial obligations were over $79 million, and the government had no way to repay its debts. As the first Secretary of the Treasury, Alexander Hamilton set out to establish a sound financial system for the fledgling country, in part through a document titled Report of the Secretary of the Treasury to the House of Representatives, Relative to the Provision for the Support of the Public Credit of the United States. The first edition of this document is currently up for bid at Freeman’s from the Alexander Hamilton Collection of John E. Herzog. The document includes a broad legislative program that set the foundation of today’s financial system.

Each available historical item, document, and manuscript relates to Alexander Hamilton. Beyond the Treasury report, there are also autographed letters, a printed Treasury Department circular, signed promissory notes, and a lot of five items related to the birth and death of Hamilton. Bidders will also find a small painting modeled after the famed Hamilton portrait by John Turnbull. View any of these lots and register to bid on Bidsquare.