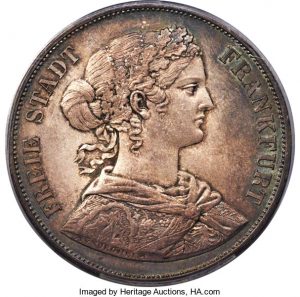 Taler, kreuzer, and gold ducat coins are included in the upcoming Special Collection of Frankfurt Coins Monthly Online Auction, presented by Heritage Auctions. Frankfurt was a free city in Germany for over five centuries, beginning in 1372 and ending in 1805. Now the largest city in the German state of Hesse, Frankfurt is the business and financial center of Germany. The European Central Bank and German Stock Exchange are located there.

The taler was the common currency for the Holy Roman Empire until its demise in 1806. Highlighted in this auction is an 1866 taler. This coin features white centers and a dark blue rim. A 1742 gold ducat coin is also showcased. Gold ducat coins were used for trade in Europe until the 20th century. This coin shows slight signs of wear on the high points but is overall crisp and defined. View all 90 available lots and register to bid at Heritage Auctions.