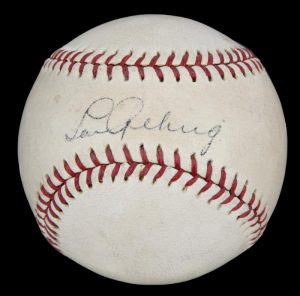 From an ID card for Marilyn Monroe to Babe Ruth’s coaching uniform for the Brooklyn Dodgers, 635 memorabilia and historical pieces will be available in the upcoming Southern Gentleman’s Collection event, offered by Julien’s Auctions. Each piece comes from the personal collection of Dr. Goodman Basil Espy III, who Julien’s Auctions notes is “excited to see the next generation of popular culture [collectors]”.

After his hall of fame playing career, Babe Ruth joined the Brooklyn Dodgers as a first base coach in 1938. The coaching uniform available in this auction comes from Ruth’s only season with the Dodgers. His name is embroidered in red on both the collar and waistband. While Ruth is likely the most popular baseball player in the sport’s history, his coaching career was derailed due to immaturity. “How can you manage a team,” asked Yankee’s owner Jacob Ruppert about Ruth, “when you can’t manage yourself?”

Another lot featured in this auction is a military ID from 1954 for Norma Jeane DiMaggio, better known as Marilyn Monroe. This noncombatant’s certificate of identity card was issued to Monroe so she could perform for American troops in Korea, and also honeymoon with Joe DiMaggio. Performing for the troops helped her build confidence in front of a live audience. “I never felt like a star before in my heart,” said Monroe of her 4-day show. Those interested in this or any other lot can register to bid on the Julien’s Auctions website.