A Partial Gentleman’s Library: Important Books from Around the World 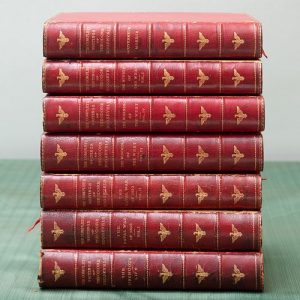 Captain James Cook was one of the only 18th-century explorers to undertake more than one Pacific voyage. In three trips between 1768 and 1776, Cook mapped the Pacific Ocean, New Zealand, and Australia. His work clarified the geographical knowledge of the southern hemisphere, then still misunderstood. Captain Cook’s Set of Three Voyages is available in the upcoming auction of a gentleman’s library, presented by Stair. The book set comes with engraved plates, charts, and maps.

The Stair event also includes historical war books, with Winston Churchill’s The Second World War among the highlights. The Second World War, presented in six volumes, is Churchill’s account of the war that affirmed his place in history, both as a politician and a writer. Churchill was awarded the Nobel Prize for Literature in 1953 for his description of the war. Register to bid for these lots by visiting Bidsquare.