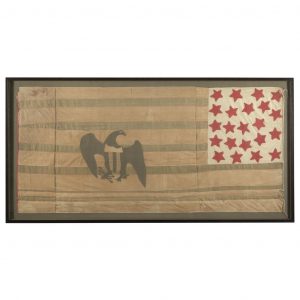 From the moment Dr. Peter J. Keim handled his first vintage American flag, he knew he had stumbled on a lifelong passion. His collection of American flags was built over the course of forty-five years and will come to auction in late November. Freeman’s will present Keim’s collection, including numerous incarnations of the flag as the nation expanded. A 16th star was added to the flag around 1830 to commemorate Tennessee’s entrance to statehood. One of these 16-star flags is available in this sale with an unusual star arrangement. Their form suggests that three extra stars were hand-sewn on after the flag’s original creation.

Other flags set themselves apart in different ways. A Free Soil Party flag has the stars arranged to spell the word “FREE” to reflect the organization’s opposition to expanding slavery. The stripes on another include navy blue along with red and white to celebrate the entrance of Texas into the Union. Beyond American flags, this auction will also include various pieces of Americana and ephemera, including a mourning pin for Abraham Lincoln and several lithographs. Browse the full catalog and register to bid on  Invaluable