A Collection of Edward Gorey 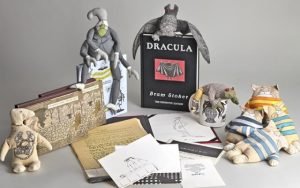 Edward Gorey was a prolific illustrator, best known for his macabre artworks for books, periodicals, and posters. He was also an author in his own right. On the 95th anniversary of Gorey’s birth, a selection of his works is presented for auction in an upcoming event offered by Doyle.

Available from Gorey’s written work is an unpublished four-page manuscript of Can Pigs Fly, a children’s story. Part of the first page is typed, with several handwritten corrections; the rest of the manuscript is in Gorey’s handwriting. Also in the sale is a limited edition copy of his book titled The Lavender Leotard; or Going a Lot to the New York City Ballet. This lot was a presentation copy given to Andreas Brown of the Gotham Book Mart. The book includes a lavender graphic cover label with a hand-colored tutu by Gorey.

From his work in posters is a set of six alphabet broadsides titled The Thoughtful Alphabet, each individually titled and numbered 2, 3, 4, 10, 14, and 15, respectively. The posters are illustrated with Gorey clip art images. Each poster is from a limited edition and signed by Gorey. View any of these lots and register to bid by visiting Doyle’s website.