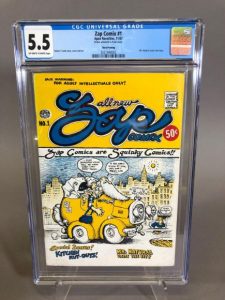 Back in the days, what was more exhilarating than mobile phones, internet games and social media? The answer to that might be “Comic Books”. Starting from the 1940s, their popularity soared and the fascination with them never stopped. This August, presenting such exciting comic books is Alderfer Auction at their 2nd Chance Offering Comic Book auction. The auction provides its diversified range, featuring books from the golden era to the modern, with underground assorted zap comics, x-men, green lantern, and more.

Amongst the notable item is a 20- Marvel, DC, Independent TBPs which includes Darkseid Vs. Galactus (Angela), Souadron Supreme, Silver Surfer and much more. One can also bid for Short Box of Assorted Comics consisting of Alpha Flight, Angel, X-Men, Soulfire and more at the auction for a wonderful addition to a personal collection. For more of such comics visit Aldefer Auctions and enjoy a good science fiction read.