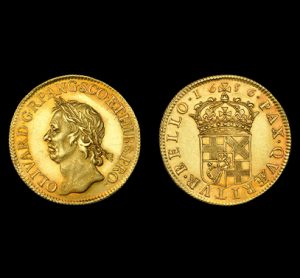 An Oliver Cromwell Broad gold coin is the leading lot of Dix Noonan Webb’s upcoming auction. Born in 1599, Oliver Cromwell rose to prominence at the beginning of the English Civil War. After Cromwell and his allies proved victorious in the Civil War, they executed King Charles I to establish the Commonwealth of England. Cromwell earned the title of Lord Protector in 1653. Soon after, he introduced the new coinage. The Cromwell Broad gold 20 shillings was struck between 1656 and 1658; production soon halted due to Cromwell’s sudden death. The 1656 is an early example of the first milled coins in England. The available coin features Cromwell’s portrait with a laureate wreath on one side. The other side bears his personal motto ‘PAX QVÆRITVR BELLO,’ meaning ‘peace is sought by war.’

The sale also offers coins dating from the time of Alfred the Great and Harold II. A silver penny of Harold II is one of the highlights. Harold Godwinson, popularly called Harold II, was the last crowned Anglo-Saxon king of England. He only ruled for nine months before William the Conqueror invaded England in 1066, defeating Harold at the Battle of Hastings. Coins minted during Harold’s reign featured a bust facing left on one side and ‘Peace’ written on the other side. Those interested in this or any other lot can register to bid by visiting Dix Noonan Webb.