Robert Berman’s Santa Monica Auctions has been in business for decades, a twice-yearly weekend event offering rare fine art and ephemera gems with an above-average rate of interesting provenances. But even by his standards, Lot 110 at the Sunday, May 6, auction takes the cake. And the cats. And dogs. And clown suits. It’s everything.

Lot 110 is a painting by the legendary Margaret Keane, of Big Eyesfame. At almost 4 x 6 feet, it is her largest canvas, and something of a crown jewel in her career. Commissioned by Jerry Lewis in 1961 as a portrait of the comedian and his family with his first wife, Patti Lewis, it originally features their five children (plus three cats and four dogs). Two years later, the couple had a sixth child, a son, and Keane came back and added him to the painting. You can see him as the small child on Patti’s lap, in the white onesie with the blue collar.

Keane herself wrote of the experience, “Until such an unlikely time as I paint the Ride of the Valkyries, this shall remain my most gymnastic work. I had to use hitherto unsuspected muscles to tether this herd. There are 14 subjects and guess which one was the most difficult to keep in focus.” And she also addressed the situation with the Harlequin costumes. “Here the clownish part of him is seen only in the motley he wears. The rest is Jerry Lewis, the intense creative personality, devoted family man….”

Devoted or not, the Lewises divorced, but Patti had the painting and it was willed to the estate when she died. One of their sons, who was managing the family estate, sold the painting to a buyer who was a friend of the family, for an undisclosed sum, with the stipulation that he could not sell the painting for at least five years. In fact, that buyer held on to it until Jerry Lewis died in 2017. Since then, this trusted but unnamed person inquired with a private dealer as to its sale. And that brings us to May 6. Not only will the sale proceed as perhaps the biggest draw to this year’s event but its display at Bergamot Station (currently on view through auction day) marks the first time it has been exhibited in public at all.

With a minimum estimate of $100,000, none of us are going to be bringing it home, so this may also be the only time it’s seen in public. Good thing it’s free to look. 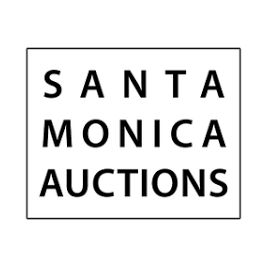