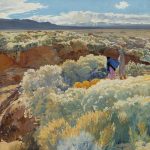 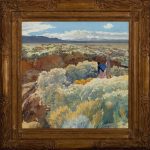 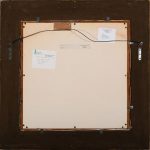 Art historian Mary Carroll Nelson wrote, “The landscape, the Indians, and the ambience of Taos captured Ufer as it had other members of the Taos Society of Artists. He joined the Society in 1915, its seventh member.

“Taos vitally affected Ufer’s academic approach to painting. He lightened his palette in response to the brilliance of Taos skies, and he moved out into the landscape with his easel. Many of Ufer’s Indian pictures are of figures in landscape. He once wrote, ‘This country will never be painted out for it has an infinite variety of moods and types.… I choose my motifs and take my models to my motifs. I design the painting there. I do not make small sketches of my models first but put my full vitality and enthusiasm into the one and original painting. Studio work dulls the mind and the artist’s palette. I do not use the camera, in fact I know nothing of photography. A large painting must have the same strength and freshness that a small sketch has, and to make a large painting you must go at it just the same way as if you were making a small one.’”