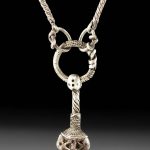 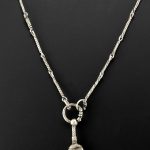 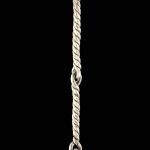 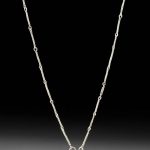 Northern Europe, Viking/Norse culture, ca. 10th to 12th century CE. A gorgeous sterling silver necklace featuring a chain comprised of 26 slender twisted silver pieces of tubular form connected by loops at each end and a pendant of Thor’s hammer. Suspended by a ring wrapped in another piece of silver and stamped with dots to resemble a coiled rope, the hammer pendant falls from a spherical loop bearing three dots. That hammer pendant’s handle is embellished with a diagonal coiled rope design, as well as a thinner horizontal version of this motif nearer to the hammer head, which is decorated with a geometric pattern of triangles over a dotted ground. Size of hammer: 0.5″ W x 1.375″ H (1.3 cm x 3.5 cm); Size of full necklace: 16″ L (40.6 cm); Weight: 41.1 grams; silver quality of all elements: 90%.

Small Thor’s hammers were worn as religious amulets throughout the Viking era, usually made of silver and usually hung on silver chains. Some even made it to the Christian era; there is a famous example of a Thor’s hammer amulet from Fossi, Iceland, that has been turned into a cross.

The important Viking metalworking shops correspond to their great trading ports and proto-urban centers – Birka, Helgo, Sigtuna, and Lund in Sweden, Ribe, Haithabu (Hedeby), and Fyrkat in Denmark, and Kaupang and Trondheim in Norway. Silver was the principal currency of the Viking world, which stretched from Russia to northern Canada at the height of their influence. In many places, the Vikings kept silver not as coins, but as jewelry, a wearable currency form that was not subject to the authority of a monarch or mint. One of the most common archaeological finds from the Viking period is a hoard of metal objects, often buried in the earth or deposited in bodies of water, like river beds. These are found in great quantities throughout the British Isles and the Nordic countries.