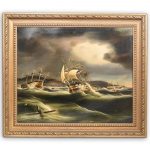 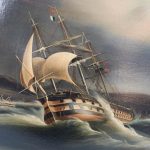 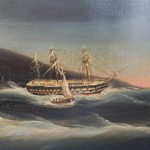 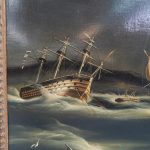 Thomas Buttersworth (British, 1768â€“1842) was born on the Isle of Wight, and joined the Royal Navy in London in 1780. He began his painting career while at sea, and the accuracy of many of his late 18th-century Mediterranean subjects, and his paintings of the Battle of St. Vincent and the Blockade of Cadiz, would indicate that they were painted on location. On his return to England, he established himself as a painter of marine scenes, executing ship portraits of larger naval and merchant vessels and important naval engagements. These included his famous Battle of Trafalgar, which was exhibited at the British Institution in 1825, and is now a part of the National Maritime Museum collection in Greenwich.He exhibited only one painting each at the Royal Academy, the British Institution, and Suffolk Street, but he was a prolific artist whose works were and still are very popular with collectors.