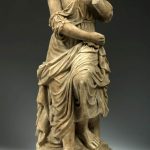 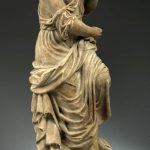 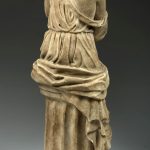 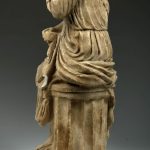 Western Europe, France, Rococo, ca. 18th century CE. This expertly carved marble statue depicts an elegant goddess, draped with a chiton with fabric folds cascading over her curvaceous body and the left sleeve falling seductively from her shoulder. She sits upon a fluted column with her left knee bent, her right leg fully extended, and her sandaled feet positioned accordingly. Her arms are positioned as if they were holding an attribute; note how her right hand is clenched in a fist. Indeed, this lovely lady’s pose is anything but static, despite the fact that she is sitting. Although the goddess’ head is lost, long wavy tresses over her neck and shoulder allude to her timeless beauty. This idealistic representation displays the sculptor’s inheritance of the Classical Greek tradition, demonstrating a continued Greek influence over Roman sculptors. Size: 26.5″ H (67.3 cm)

The sculptor’s ability to capture the goddess’ weight shift and rhythmic sense of motion conjures a quality of human vitality in this sculpture. Such calculated poses were inspired by the ancient Greek works of Polykleitos and became the model to which sculptors aspired in Graeco-Roman as well as later Western European art. Although no particular attributes of this figure are visible, the fine level of technique and artistry displayed in this piece suggests that it depicted a goddess – perhaps Venus (Aphrodite in the Greek pantheon), the goddess of romantic love, who magically rose from the sea on a giant scallop shell – or Fortuna (Tyche in the Greek pantheon) whose name literally means “fortune” as she is associated with both bona (good) and mala (bad) fortune, chance, and luck – or Diana (Artemis in the Greek pantheon), the goddess of hunting and the moon. Regardless of her identity, any goddess would have been proud to have such a stunning portrayal dedicated to her. A masterfully realized figure presenting a convincing naturalistic pose implying lifelike movement as well as exceptional modeling of her body and garment. Clearly, the technical skill of this sculptor was paramount. Indeed the artist who created this piece clearly possessed the expertise required to turn stone to fabric and flesh!