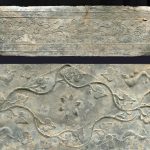 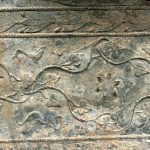 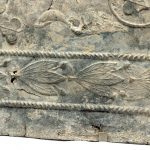 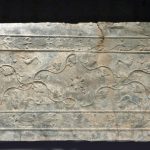 Roman, Imperial Period, ca. 2nd to 3rd century CE. A rare complete panel from a lead sarcophagus, its surface decorated with relief images encoded by its makers with deep meaning about how Romans memorialized their elite dead. The top and bottom are bordered by wide horizontal bands of repeated dense leaves. In the center, vines weave through each other forming broad X’s with large-petaled flowers at their centers. Above and below are repeated leaping dolphins. Size: 20.5″ W x 67.5″ H (52.1 cm x 171.4 cm) The panel is mounted on a piece of wood with a slightly smaller footprint.

Prior to the 2nd century, Romans cremated their dead; around that time, they became inspired by the Greek and Etruscan practice of using sarcophagi, and they began to make lead coffins. This trend spread rapidly throughout the Roman Empire. In the western part – where this panel likely came from, based on the leaf motif – sarcophagi were placed inside a mausoleum against a wall or in a niche. The leaves refer to actual garlands and flowers used to decorate tombs and altars. The dolphins, meanwhile, remind us of a powerful and common motif in Roman artwork. The Romans were largely a maritime empire, and the iconography of the sea included dolphins. Romans believed these animals carried souls to the Fortunate Isles, perhaps because they could pass through the air-breathing terrestrial world and into the watery depths that claimed so many Roman sailors’ lives. This symbol must have had personal significance for the deceased, who often ordered lead coffins to be made long before they died – the process of making them required such a long time that they could not be rushed!