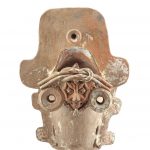 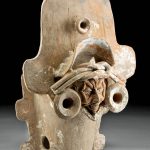 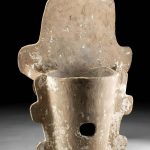 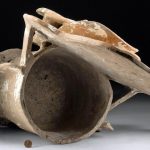 Pre-Columbian, Central Mexico, Oaxaca, Classic Monte Alban III, ca. 300 to 600 CE. A very large incense burner, skillfully hand-built from terracotta and presenting the visage of the Hueheuteotl, Zapotec’s Fire God. The deity looks out with an expressive, wrinkled face delineated with wide-open eyes with rendered irises/pupils and sclera, a furrowed brow, a naturalistic nose, and parted lips that reveal his tongue. He wears enormous ear flares, a pectoral, and an impressively large mushroom-shaped headdress (perhaps to reference hallucinogenic mushrooms used during ceremonies), adorned with a skillfully knotted rope ornament. This countenance emerges like a specter from a cylindrical neck that also serves as the vessel body, with perforations through which fragrant incense would have emanated. Size: 12.25″ L x 16.125″ W x 22.125″ H (31.1 cm x 41 cm x 56.2 cm)

Such masterfully hand-built and modeled incensarios were coveted works of prestige, and local lords in the Monte Alban area received them via gift-giving networks that reinforced their power and might. The figure depicted here is that of a recognizable deity – Huehueteotl, the old god of fire, who is among the oldest deities in the Pre-Columbian world, though his precise origin is unknown. Other incensarios and vessels depicted magical spirits, ancestors, or shamans impersonating gods.