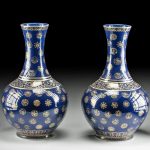 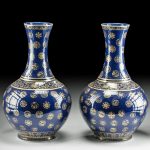 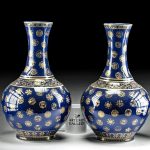 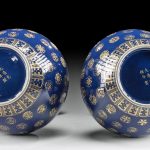 East Asia, China, Qing dynasty, Guangxu, ca. 1875 to 1908 CE. An exemplary pair of porcelain vases boasting an intricate gilt design atop a rich hue of navy blue. Adorned with a lustrous burnish, these opulent vessels present identical forms, each with a bulbous body, a graceful, elongated neck, and an annular, flared rim, all sitting upon a concave, circular foot. The body and neck of the vessel are embellished with lovely botanical medallions, all equidistantly scattered, as a thick band of a swirling lotus scroll with “shou” (longevity) characters encircles the shoulder. A meander pattern adorns the foot with a pretty design of petal lappets sitting just above it. The golden rim is additionally decorated by ruyi heads, which are representative of the Chinese god of prosperity, Cai Shen, as well as the act of achieving success in fengshui practice. The base of each vase is marked with 6 Chinese characters in kaishu script, indicating that these elegant examples were made during the rule of Guangxu (1875 to 1908) during the Qing dynasty. Size (both the same): 10.5″ in diameter x 16.125″ H (26.7 cm x 41 cm)