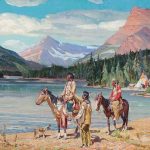 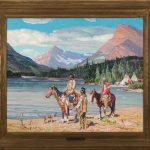 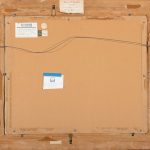 Western art historian Dr. Larry Len Peterson writes, “For over a century, artists have answered the call of the mountains, yet one painting stands at the pinnacle, The Domain of Their Ancestors. The incomparable setting showcases Mt. Grinnell on the left and Mt. Wilbur in the center, located in the Many Glacier region of the ‘Crown of the Continent,’ Glacier National Park in northwestern Montana. Mt. Grinnell was named after George Bird Grinnell (1849-1938), the father of Glacier National Park; editor of Forest and Stream; prolific author; and along with his close friend Theodore Roosevelt, founder in 1887 of the Boone and Crockett Club. At the altar of the snow-covered massifs are Swift Current Lake and Falls. To the left of the falls is where Many Glacier Hotel – at the time the largest Hotel in Montana – was built in 1915 by Louis Hill’s Great Northern Railway (GNR).

“The noble, mounted chief donning a peace medal in the center foreground is Blackfeet Two Guns White Calf (1872-1934). After the death of Chief Joseph in 1904 and Geronimo in 1909, he was the most famous Native American in the nation for decades. Chief Two Guns is the Indian most closely associated with the buffalo nickel, designed by James Earle Fraser (1876-1953) and minted from 1913 to 1938. The GNR touted him as the model, and tourists couldn’t wait to catch a glimpse of him as they disembarked at the East Glacier Park train station. In addition, he traveled the country for the GNR, promoting the ‘Alps of North America’ and appeared on the front page of almost every major newspaper in the country. The railway also showcased Winold Reiss (1866-1953) paintings of him on tens of thousands of their Brown & Bigelow calendars. Two Guns was a national celebrity. Born near Fort Benton, Montana, he was the son of White Calf, a famed Blackfeet chief. His father was a leading representative for the Blackfeet when they negotiated the 1895 treaty with the United States. After White Calf died in 1902, Two Guns became a tribal chief and spokesman. He was the head of an organization called the Mad Dog Society whose goal was to preserve Blackfeet heritage, which included the Sundance and Ghost Dance ceremonies. Two Guns lobbied in Washington, D.C., demanding additional payments for the land ceded in 1895 that became the eastern portion of Glacier National Park – the domain of his Blackfeet ancestors. One reporter in admiration called him the ‘William Jennings Bryan of the red race.’

“Still, it took Oscar E. Berninghaus and his grand imagination to create one of the greatest tributes to Two Guns and Glacier National Park. Born in St. Louis, Missouri on October 2, 1874, he fell in love with art from time spent at his father’s lithography business. He wrote, ‘The painter must first see his picture as paint-as color-as form-and not as a landscape or figure.’ In 1915 Berninghaus along with five other celebrated artists founded the Taos Society of Artists (TSA), which disbanded twelve years later, but only after making an indelible mark on Western art. An example of his tireless devotion to the promotion of the TSA was writing over 125 letters during his tenure as secretary to art patrons in St. Louis where he once exhibited with Charles M. Russell. Russell owned Bull Head Lodge in Glacier National Park, and surely he touted the unparalleled vistas of Glacier country to his artist friend. Below the artist’s signature in his hand writing is ‘after photo.’ Most likely the painting was inspired by a collage of photographs taken by Roland Reed (1864-1934), one of the most renowned pictorialist photographers of his generation. After a long, illustrious career, Berninghaus died of a heart attack on April 27, 1952 in Taos, New Mexico. There is no finer example of The American West Reimagined than this masterpiece. As legendary Bob Drummond – the most important force in the history of the Western art auction – wrote, The Domain of Their Ancestors is ‘the best Berninghaus painting ever painted.’”