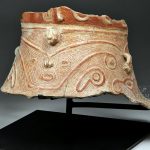 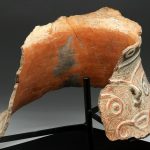 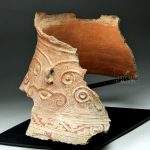 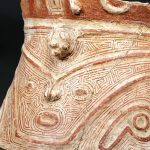 Pre-Columbian, Brazil, Marajoara culture, ca. 800 to 1400 CE. A large fragment from a massive ceramic funerary urn. This represents much of the neck of the vessel, with a protruding anthropomorphic face featuring a smaller zoomorphic head projecting from its forehead. Raised bands of clay form abstract symbols and a border around the head, giving the impression of large horns and two other faces. Swirling and labyrinthine geometric motifs, painted in red on the pale brown background, create an ornate surface and suggest ritual tattoos or scarification. Urns of this size have never been found in a complete and intact state. Size: 27″ W x 15″ H (68.6 cm x 38.1 cm); 19″ H (48.3 cm) on included custom stand.

The Marajoara – also known as the Marajo – flourished on Marajo Island, in the mouth of the Amazon River. They built impressive mounds and lived subsistence lifestyles while producing stylistically-unique, beautiful pottery like this. This was a large-scale civilization, contrary to what many European researchers believed of the Amazon before their discovery – the mounds ranged from 3 to 10 meters in height, and some sites cover more than 10 square kilometers and contain 20 to 30 individual mounds. Their figural pottery was mainly of females, representing roughly 70-90% of all known ceramic sculptures from the Marajoara and their neighbors the Santarem, which researchers believe indicates that chiefly descent came from a mythical female ancestor. During this period, both male and female figures are shown as shamans. Urns were buried in the many large cemeteries known from the region, and the soil conditions have preserved the human remains inside them quite well; as of yet, no formal studies have been undertaken on them, representing a potential treasure trove of information that could rewrite what we think of the ancient Amazon Basin.

Ancient & Ethnographic From Around The World