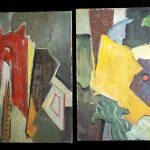 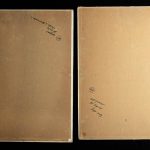 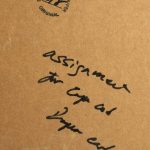 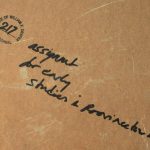 William Franklin Draper (American, 1912-2003). Two untitled (abstractions), oil on canvas boards, 1930s to 1940s. A very unusual pair of William Draper paintings, created when he was a student in the arts colony of Provincetown or the Cape Cod School of Art. Both paintings are abstract compositions with very little if any reference to figural iconography. Interestingly, Draper would later develop a dislike for abstractions. Hence, these two very rare examples from Draper’s oeuvre! Size of each painting: 24″ L x 19.875″ W (61 cm x 50.5 cm)