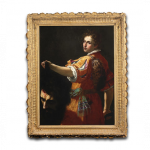 This striking, freshly discovered depiction of David and Goliath has been independently proclaimed by the foremost authorities in their field to be a ‘masterpiece’ by Jacopo Vignali, one of Florence’s leading artists of the early 17th century. We are grateful to Professor Francesca Baldassari for identifying this work on the basis of colour photographs as ‘a masterpiece by Jacopo Vignali datable to around 1624 on the basis of other monogrammed and dated works by him of the period, such as the Drunkenness of Noah in the National Gallery in Prague’ (see fig. 1). This is an opinion that was corroborated, furthermore, in a recently unearthed letter to the late owner, dated 3 July, 2003, from Professor Mina Gregori, that refers to this ‘splendid painting with “David with the head of Goliath”‘ of which ‘I firmly think that the painter is Jacopo Vignali, one of the best Florentine painters of the XVII century.’ With reference to the painting’s prior attribution to Cristofano Allori, she writes that ‘this painting is one of his [Vignali’s] masterpieces.’ Professor Gregori continues: ‘You can recognise Vignali from the light, very different from Cristofano and more naturalistic, coming from different experiences: And the boy is his usual model.’ Both the dramatic composition and outstanding quality of this work represents the height of Vignali’s achievement as a representative of a school of painting that valued so highly the importance of disegno.

The subject of David and Goliath has inspired some of the greatest works of art of all time, including Donatello’s and Michelangelo’s sculptures, which Vignali will have been familiar with in his native Florence. There the subject symbolised the courage and resilience of the small city state (and subsequent Grand Duchy) in the face of the larger rising nation states that surrounded it. Florence was all too aware of the threats that encompassed her and consequently David was a perfect symbol of the liberty and freedom of the Florentine people, capturing the unwavering courage, unexpected strength, and historic perseverance that they saw in themselves. Traditionally, David had been portrayed after his victory, triumphant over the slain Goliath. Florentine artists like Verrocchio, Ghiberti and Donatello all depicted their own version of David standing over Goliath’s severed head; while Michelangelo and Donatello instead, chose to represent David before the battle.

The account of the battle between David and Goliath is told in Book 1 Samuel. Saul and the Israelites were facing the Philistines near the Valley of Elah. Twice a day for 40 days, Goliath, the champion of the Philistines, came out between the lines and challenged the Israelites to send out a champion of their own to decide the outcome in single combat. Only David, a young shepherd, accepted the challenge. Saul reluctantly agreed and offered his armour, which David declined since it was too large, taking only his sling and five stones from a brook. David and Goliath thus confronted each other, David hurling a stone from his sling with all his might which hit Goliath in the centre of his forehead: Goliath fell on his face to the ground, and David then cut off his head. By vanquishing sin David had made Israel safe; his unwavering faith in the face of war, and his subsequent rough path to kingship marked him as a hero; he was further admired for his Psalms, while his righteousness and repentance were extolled consistently throughout the Renaissance and Baroque period. When Saul tried to kill David, not once but several times, David never returned such an attempt, possessing virtues which Italian princes desired for themselves. As a king, David was quick to administer justice to those who deserved it and quick to welcome in outcasts, such as Jonathan’s lame son. He defended his kingdom rigorously and victoriously. As a man, David was favoured by God, talented, handsome, and he rose to power at a young age. He was the pre-cursor of Christ, and a symbol of pious perfection. David’s image was the perfect commission for a prince of the Church wanting a constant reminder of faithfulness and redemption, or for a secular prince, wanting a public and readily recognizable symbol of power and fidelity.

Jacopo Vignali trained under Matteo Rosselli, entering his studio in Florence around 1605 at the age of only thirteen; in 1616 he joined the Accademia del Disegno becoming an academician in 1622. Although Rosselli was to have a lasting influence on his pupil’s oeuvre, Vignali gradually evolved his own style distinguished by dramatic light effects, rich colour, painterly technique and a particularly poetic and emotional interpretation of his subjects. His most famous pupil was Carlo Dolci, who was profoundly affected by the intensity of his religious works. Thus Vignali has himself here put a new contemporary interpretation on this subject, employing his and his fellow early seventeenth century Florentine’s celebration of rich and colourful fabrics in the use of contemporary costume in depicting a biblical scene, along with the innovative pictorial drama that Caravaggio had recently made popular throughout Italy, and subsequently Europe. Caravaggio had himself treated the subject three times, between circa 1605 and 1610 in masterpieces which are now respectively in the Prado, Vienna and the Villa Borghese. The masterful way in which Vignali handles the paint, the remarkably delicate modelling of the flesh tones and the theatrical elegance of his simple composition illustrate not only Vignali’s particular style, but also the broader trends within Florentine painting at the time. Unpublished until now, this canvas is a rare and significant addition to the oeuvre of Jacopo Vignali, who has been regarded as the foremost painter of the Florentine Seicento.