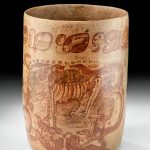 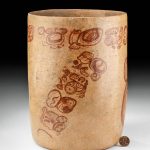 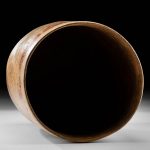 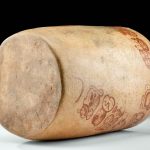 Pre-Columbian, Northern Peten, Guatemala, Maya, Late Classic Period, ca. 550 to 900 CE. Amazing! Presenting macabre and incredibly striking motifs, this is a ceramic cylinder vessel with rich iconography. It was probably given as a gift during a feast and used for drinking cocoa. It is tall, with a wide mouth and an unpronounced rim whose edge is gently curved. It stands on a flat base with gently upturned edges, and the sides taper very slightly to the mouth. One complete side of the exterior body is dominated by a painted profile of a composite skeletal image of God A and Chak (he wears the pendant of Chak) in animal form. He stands on all fours and appears to be inside a darkened cave, possibly the underworld. Glyph bands adorn the top rim and run diagonally up one side. Size: 6.625″ W x 9″ H (16.8 cm x 22.9 cm)

God A is one of the Maya codical death gods, known to us only from early colonial-era documents and from the work of 19th century scholar Paul Schellas, who named the gods for letters from the Roman alphabet because at the time Maya hieroglyphs could not be read. A figure similar to God A is referred to with many different names by modern Maya people – often Kimi or Ah Puch – and is the Lord of the Underworld (known variously as Xibalba or Mitnal depending on the dialect). God A is often painted as he is here, as partially dead, with grey, decaying flesh and skeletal bone structure. He is meant to be both terrifying and grotesquely funny, and this portrayal, with its askew teeth and bulbous nose, embodies both. Modern Maya folklore still considers God A a threat – creeping around the houses of the sick, waiting to take them to Xibalba.

Showing a chiaroscuro technique seldom seen with such naturalistic result. Note the background behind the WHAY figure is delicately shaded to give the effect of depth, possibly indicating a cave opening, portal to XIB’AL’BA. This area has not been altered by modern restoration! The deity’s three-dimensional rib cage, and skeletal arms and legs become even more gruesome with this unique and innovative shading technique used by the scribe.