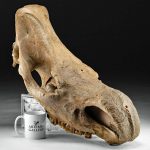 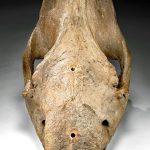 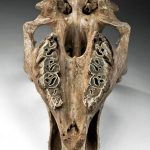 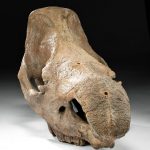 Central Asia, Siberia, Pleistocene, ca. 2.6 million to 12,000 years ago. A rare and striking skull from one of the most famous beasts of the last Ice Age – the Woolly Rhinoceros (Coelodonta antiquitatis). Now extinct, the head of the ancient beast presents a lengthy, rounded snout, a pair of sizable nostrils, huge, sunken eyes, and twelve teeth, each showing a thick enamel and the swirling structure of the internal cavity. The enormous animal could grow to 12.5 feet (3.8 meters) in length and 4,400 pounds (2,000 kilograms) and featured two giant horns with the longer reaching forwards and the smaller between the eyes, as well as a long fur coat with a thick undercoat. A powerful hump on the creature’s back allowed it to support its heavy horns. Size: 13.625″ W x 27.5″ H (34.6 cm x 69.8 cm)

Regardless of their massive bodies and brutish appearance, woolly rhinoceros primarily fed upon grasses and sedges in the mammoth steppe, hence their downward facing heads, flat teeth, and lack of incisors. This fact is lucky for the paleolithic humans who not only lived beside them, but also drew representations of the ancient rhinos on cave walls in France and built statuettes of beasts in the Czech republic. Interestingly, however, when a fossilized head of the animal was first recovered in 1335 in Austria, it was believed to belong to a dragon, and later in 1590, it became classified as an “ancient griffin”. By the 18th and 19th century, researchers began to recognize the animal as part of the rhinoceros family, yet having the fur of a woolly mammoth, part of the elephant family. So, what did they call this fascinating cross between an elephant and a rhino? Elephino!