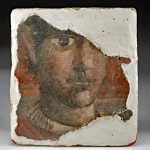 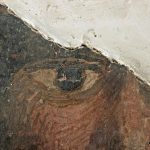 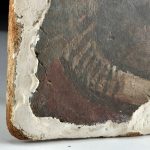 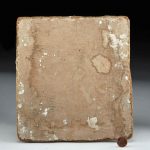 Roman, Imperial Period, ca. 1st century CE. An ancient Roman fresco fragment depicting the head of a figure, with a large eye that is nicely delineated with generous lids, a black-brown iris, and a white sclera, an aquiline nose, pursed lips with a well-delineated philtrum above the upper lip, a naturalistic ear, well-modeled facial planes, a rounded chin, and a thick torc (also torq and torque) around the neck that suggests this subject may be a Gaul or possibly a soldier. Interestingly, the Roman Titus Manlius challenged a Gaul to combat in 361 BCE, and when he defeated and killed the Gaul, he took his torque and wore it forever more, thus earning the nickname Torquatus (one who wears a torque). After this momentous event, the Romans adopted the torque to decorate distinguished soldiers during the Republican period. Size: 8.25″ L x 7.75″ W (21 cm x 19.7 cm); mount 9″ L x 8.25″ W (22.9 cm x 21 cm)

The ancient fresco technique involved applying saturated pigments into wet lime-rich plaster, and only the wealthiest, most elite Romans adorned their houses with these elaborate wall paintings which required immense skill to create. Art historians have identified four styles of wall painting. This example aligns closest with the Second Pompeiian Style – also known as the architectural style – which was popular during the 1st century BCE. This style was characterized by illusionism whereby the walls were painted with architectural elements framing compositions that fooled the eye into believing they were real via a trompe l’oeil effects. While we cannot see architectural elements given the size of this fragment, the artist of this piece successfully achieved naturalism in the visual imagery via subtle tonal changes, modeling the figure with color and shading, and suggesting depth with foreshortening.

Another aspect of Roman wall painting to appreciate are the brilliant colors which contrast with the white hues of surviving ancient marble sculpture. Scholars have demonstrated that classical sculptures were actually originally brightly painted; however, the pigments have worn away over the ages. Thankfully, ancient wall paintings demonstrate the bold coloration that embellished ancient visual culture. What’s more, while some of the most impressive artists of the Classical world were painters, sadly, many of their creations were painted on wood panels and have disappeared due to the perishable nature of this material. Thankfully, other forms of Classical art such as vase paintings, mosaics, and even a few fresco fragments like this example – many surviving from Pompeii and Herculaneum buried under the ash of a volcanic eruption in the year 79 CE – have survived the tests of time and can provide a means of understanding ancient painting techniques.