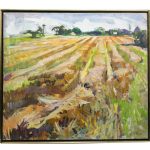 DESCRIPTION
William Draper (American, 1912-2003). “Fields – Bridgehampton, Long Island” oil on canvas, 1967. Signed “Wm. F. Draper” in black on lower right. A large painting presenting a sweeping view of the natural landscape of Long Island’s Hamptons on the southern fork of eastern Long Island by American artist William Draper. Bridgehampton is home to the famous Hampton Classic horse show as well as designer boutiques and high-end restaurants; however, Draper has elected to capture the natural beauty of its farms and fields, a place that was once home to the Shinnecock Indians. Draper’s skill is undeniable; note how he captures both the vibrant grasses and hay bales of the foreground and the more ethereal quality of the horizon line and blue skies above in this dramatic composition that invites us in with Draper’s seductive brushstrokes and palette knife work, and simultaneously beckons our eyes to sweep through the field to the distant horizon line. All is delineated in a brilliant palette of buttery yellows, golden beige, spring green, forest green, sky blue, and whispery white hues. Size: 32″ W x 28″ H (81.3 cm x 71.1 cm) Size: 33.375″ W x 29.5″ H (84.8 cm x 74.9 cm)

Provenance: The William F. Draper Collection, New York City, USA, acquired via descent from the late William Franklin Draper (1912-2003), an accomplished American artist whose career spanned seven decades. Known as the “Dean of American Portraiture,” William Draper was the only artist to paint President John F. Kennedy from life, and his oeuvre includes marvelous landscapes from his world travels, military paintings as he was one of only seventeen Combat Artists in WWII, and portraits of illustrious individuals.

We ship worldwide to most countries and handle all shipping in-house for your convenience.

#152536
CONDITION
Painting is in excellent condition. Signed “Wm. F. Draper” in black on lower right. Gallery exhibition label on upper stretcher, left side – one can make out Madison Avenue, N.Y. on the left side of the label. “Draper Estate stamp on verso. Canvas has darkened a bit on the verso. “Property of Maggie Draper Wm. F. Draper” handwritten on verso. Frame is good save slight age wear. Wired for suspension and ready to hang.