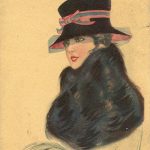 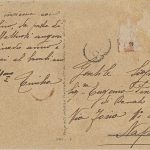 ABOUT POSTCARDS: The study and collecting of postcards is termed deltiology (from Greek deltion, small writing tablet, and English -logy, the study of).

Rarity. As with all antique items, rarity brings up the value of postcards. If only a few of the cards were printed or only a small number have survived the ages, your card may be very valuable. However, rarity goes hand-in-hand with other characteristics; if only a single card was printed, that makes it rare.

”The rarity, age and desirability of the image, as well as whether it`s an original rather than a reproduction, all play a role in making a postcard collectible”.

Nostalgia is one of the main reasons people collect postcards: pictures and stories on cards are often associated with memories from their own past. Historians actually study old postcards to find out about the people living in a certain town, lifestyle patterns, architectural differences and more.

The design of a postcard often tells you from which era it comes. For example, from 1906 onwards a US postcard had a divided back; before then it was undivided with a lack of room for greeting wishes. Between 1915 and 1930 postcards often were designed with a white border to save ink, while postcards from 1930 until 1950 have a linen look.

Despite many prefer collecting postcards with little to no marks, grease or splotches on the surface and from which the corners have not been bent or torn. Some say say it does not matter as long as the condition of the card and handwriting is good. It surely gives the card a historical value! A stamp on a postcard can add historical information depending on the readability of the date and location.

You also should consider the value and age of the stamps that are included in used postcards. Infact many of the postcards we are offering are coming with early Washington Stamps that were used during the beginning of the 20th century to deliver the postcard.