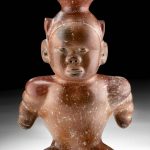 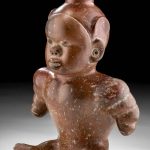 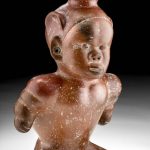 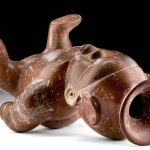 Pre-Columbian, West Mexico, Colima, Protoclassic Period, ca. 100 BCE to 250 CE. A fascinating redware dwarf effigy vessel, the seated figure presenting with out-turned legs, relatively large feet with delineated toes, broad torso and shoulders, and rippling muscular attenuated arms that terminate in a point. The figure’s visage is comprised of coffee bean shaped eyes, an upturned nose with delineated nostrils, full somewhat parted lips, pierced ears, a caplike coiffure or headdress adorned with crescentic head ornaments, with the vessel’s flaring spout emerging from the top. The highly-burnished hunchbacked figure suffers from a severe case of dwarfism made evident by his dramatic forward-leaning posture and his malformed spine which almost protrudes through his back. Scholars posit that in the Pre-Columbian world, such physical deformities were interpreted as signs from the divine, indicating that these individuals were touched by the supernatural. Size: 7.375″ W x 11.7″ H (18.7 cm x 29.7 cm)

Interestingly, Colima sculptors portrayed many hunchback and dwarf individuals, and some have theorized that this relates to their relatively high social status. In addition, some scholars attribute the hunched back in West Mexican shaft tomb culture to a particular form of tuberculosis.

Colima, located on Mexico’s southwestern coast, was during this time part of the shaft tomb culture, along with neighbors to the north in Jalisco and Nayarit. In this culture, the dead were buried down shafts – 3 to 20 meters deep – that were dug vertically or near vertically through the volcanic tuff that makes up the geology of the region. The base of the shaft would open into one or more horizontal chambers with a low ceiling. These shafts were almost always dug beneath a dwelling, probably a family home, and seem to have been used as family mausoleums, housing the remains of many related individuals. This is a figure made to be placed inside those mausoleums, perhaps to mediate between the worlds of the living and the dead.

For a similar example of a Colima seated hunchback figure, please see The Metropolitan Museum of Art, accession number X.2.431