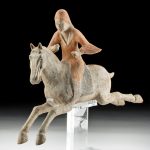 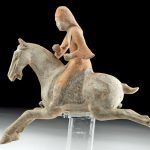 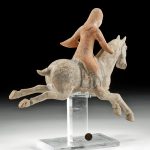 East Asia, China, Tang Dynasty, ca. 618 to 907 CE. An exemplary pottery polo player with a well-modeled figure upon a galloping horse with finely painted details and nice remaining pigments of orange, beige, white, and black. The sculpture emphasizes a powerful sense of movement and athletic balance. Note how the horse’s legs are extended front and back – a pose known as ventre a terre – while the rider leans forward, bending both arms at the elbow with hands clenched in fists, demonstrating intense focus. The player’s bellowing sleeves sway in the wind, giving the impression of quick movement, while a veil caps the head. Size: 12.75″ L x 3.25″ W x 11.125″ H (32.4 cm x 8.3 cm x 28.3 cm); 13.5″ H (34.3 cm) on included custom stand.

While a 3rd century CE poem by the Chinese poet Cao Zhi mentions the act of hitting a ball on horseback, and a mural in the late 6th century tomb of Xu Minxing in Shandong province depicts a man mounting a horse while holding what look like polo sticks, the first very clear written evidence of the game of polo in China dates to the Tang dynasty, when the game was called jiqiu (meaning strike ball). In the present day, the game is usually called maqiu horse ball) or damaqiu (strike horse ball). Both men and women of the Tang court played polo. Two Tang emperors in particular, Taizong (reigned 626-649 CE) and Xuanzong (reigned 712-756 CE) favored the game of polo. They encouraged young men of the court to play it, because the skills involved could be applied to military activities.

Tang dynasty poets were also inspired by polo. The literatus Han Yu wrote a poem entitled Poem to Commander Zhang at the meeting of the Bian and Si Rivers” which describes a polo field that was 1000 steps long, with low walls on three sides, and called the ball used in the game “the divine bead”. The poem describes the game occurring before sunrise on a cold autumn morning; drums making a thunderous sound when the red flags are raised to start the match; as well as the intense competition between the players and the excitement of the spectators. At the end of the poem, Han Yu declares that polo is not a game for mere fun, but is actually one devised for military training. This said, scholars also played polo during the Tang dynasty and successful candidates in the national civil service examinations held a polo tournament to celebrate.